EDOC – The story behind proven, superior protection in harsh environments 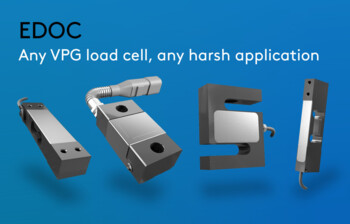 EDOC – The story behind proven, superior protection in harsh environments

The path to breakthrough innovation in load cell corrosion protection

“Necessity is the mother of invention” goes the well-known saying, and it aptly sums up how VPG Force Sensors’ unique EDOC anti-corrosion coating was developed.

Back in 2006, a manufacturer of agriculture and construction machinery approached VPG Force Sensors with a problem: it needed highly accurate load cells with excellent corrosion and abrasion resistance for extensimeters to be used in tractors and fertilizer spreaders. The load cells needed to be able to withstand exposure to the extremely aggressive chemicals in fertilizers, as well as to mud and moisture.

Stainless steel load cells would commonly have been used in such applications. But stainless steel was too expensive for high volume production and in some cases, it did not provide adequate protection.

In response, the R&D team at VPG Force Sensors developed a unique electrodeposited organic coating process for alloy steel and aluminum that it called EDOC. Adding EDOC to steel or aluminum load cells boosted the corrosion resistance beyond the capabilities of stainless steel but added only a small uplift in price. This brought the total price point for the load cell below stainless steel, suitable for high-volume applications, while providing both better corrosion resistance and the required high accuracy.

EDOC is extremely durable in harsh environments where there is severe exposure to corrosion, abrasion and other threats such as peeling, cracking or chipping. It withstands chemical fertilizers, chlorine, sulfur, salt water, animal excrement, mud and other harsh substances. EDOC is a completely different approach to attempts by other companies to boost corrosion protection for load cells, which typically involved paints or epoxies that can be easily removed or scratched.

Having solved the original request, we began mass production of EDOC in 2007. Since then, EDOC-coated load cells have been used in around 500,000 machines. In all that time – 15 years – there have been no returns due to issues with EDOC coating.

Load cells protected by EDOC have been used in agriculture equipment such as silo scales, tractors, fertilizer spreaders and sprayers, and in livestock farming systems like animal scales. Likewise, EDOC has been used to protect load cells on fishing boats and in other marine and port applications where salt water is a constant threat. In construction environments, it has been used for telescopic handlers and aerial working platforms.

With EDOC being used on an increasingly wide range of load cells, the VPG Force Sensors R&D team continued researching ways to improve performance across all types of applications. As a result, we introduced the second generation of EDOC, featuring multi-layer protection.

After EDOC has been on the market for about a decade, one of our customers had another special request: could we prove the performance of EDOC with a 1000-hour salt fog test? In the test (also called a salt spray test), conducted by an external lab, EDOC passed with zero signs of corrosion, outperforming stainless steel and exceeding the ASTM B117 standard.

Advanced corrosion protection for all

Until recently, EDOC was available only with customized load cell solutions developed for specific customers and applications. Now it is available with any standard load cell from VPG Force Sensors. On alloy steel or aluminum load cells, EDOC provides protection superior to stainless steel at a lower total cost. And, on stainless steel load cells it boosts resilience, with only a modest additional cost.

Learn more about EDOC, available only from VPG Force Sensors.